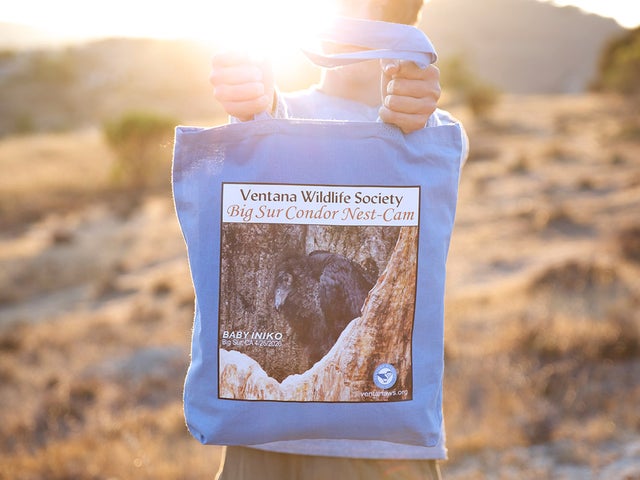 This fabric tote shows off our favorite condor gal, Iniko, who was hatched on 4/25/2020

The Dolan Wildfire swept through one August night, taking her father Kingpin among the nine free-flying condors that were lost. The flames were hot for Iniko as well, but she managed to survive in her cavernous nest. As Redwood Queen rose to the task of being a single parent, a new challenge emerged. An unmated male condor attacked the nest, possibly seeing an opportunity to claim a vacant territory. Iniko was force-fledged from the nest during the scuffle.

Redwood Queen fought off the intruder, but Iniko’s prospects seemed dim huddled there on the ground with only one parent. Our concern grew as time passed and the chick remained vulnerable, even showing a slight limp. The field crew moved in on October 19th and rescued Iniko, hiking her carefully out of the canyon and transporting her to Los Angeles Zoo for treatment and care.

Iniko has been returned to the wild in San Simeon on Dec 4 2021! We are inspired by this young condor, 'born during troubled times'.